Our newest short film “Love Lock” embodies so many aspects of what makes Wong Fu Productions so special to me after all these years. It’s the type of project that could only happen because of the uniqueness of the company we are, the friendships we have, and the fans we’ve been blessed with.

The Attitude
First, “The One Days”. In 2007, the infant years of Wong Fu Productions, Wes went to Hong Kong for a family trip and came back with 3 short films. All shot on his own with the help of a few friends, and each in just one day. This was the spirit of Wong Fu from the beginning: being inspired by our world and creating a story by any means possible. From then, every time we traveled to another country we would try to do a “One Days” almost as a challenge to ourselves. Could we think of an idea, find actors, and shoot in one day, all in the time span of our trip?  Sometimes we were successful, sometimes we weren’t (sometimes we went into a 2nd half day heh), but it was always a good reminder to myself that you don’t need much to tell a good story. There are now 11 shorts in this series and I’m sure that no matter how big our company grows to, we’ll always want to attempt a “One Days” wherever we go! 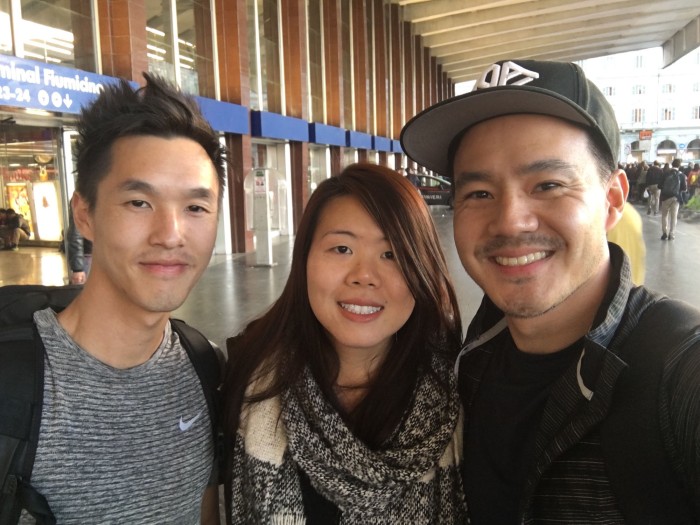 The Fans!
But we can’t do it alone. This is Portia. She’s an American med student currently living/studying in Rome. 2 weeks before we left for Italy I reached out on Wong Fu’s Facebook page to see if there was anyone in Rome that could help us with this project. Because we knew no one there, reaching out to our fans around the world was my only option. Thankfully Portia responded and was so incredibly sweet and hospitable. She helped us find actors and get around the city (it was my first time there), she even met us at the train station to make sure we got to our hotel. Her kindness was just unbelievable, and to think that just 2 weeks prior she was someone we had never met, yet she knew our videos. This connection really inspired me and made me feel so fortunate that WF has allowed us to have this amazing fanbase of extremely good people around the world who believe in us so much that they’d help at a moments notice. It’s really humbling. This picture really could’ve been with anyone of you!

Trusting Timing
Our trip to Italy was extremely last minute. We knew we were going to Florence (ya kno, that whole Tom Hanks thang? haha). But I saw an amazing opportunity to finish a short film idea I had been sitting on since 2014 when we went to Tokyo. Back then I had so desperately wanted to do a “one days” during that trip. It was there that the idea of this short first came to me, so I looked to see if there were love lock locations in Tokyo. There just to happened to be one, but it was a 2 hour train ride away in a small town on Enoshima Island. I knew I had to scope it out first so one morning I went out on my own to check it out. It was a quaint ocean town and I took some b-roll just in case. As the trip wound down I knew I wasn’t going to be able to make this short and I was really disappointed in myself. Over the next two years, every time I traveled to a new city for work, I would research to see if that city had a love lock location for me to adjust my story for. Singapore, Taiwan, Montreal, Toronto, San Diego, New York City. Nothing was working out (although I got pretty close in NYC). I began to feel like this short was never going to get made.

Fast forward to Sept of this year and finding out we were going to Italy. I did the same search and found that the actual origin of the entire concept of Love Locks was started in Rome! Just a 1.5 hr train ride away from Florence where we would be. I told Wes that this was meant to be. We had to add extra days, take the trip down, and finally make this happen.

It’s crazy, almost exactly 2 years since I returned from Tokyo empty handed, I’ve finished the short and in probably better circumstances than had it been in any other city. Wong Fu has always worked in strange ways. Never according to plan, but never lost. Trusting life, waiting for the right timing for a good story, and making the most of every opportunity.

The Process
It’s one thing to have the idea, the attitude, the help, and the timing all come together. But that’s when the real work begins. That’s when it’s time to show up. We got to Italy and it was time to make it happen! 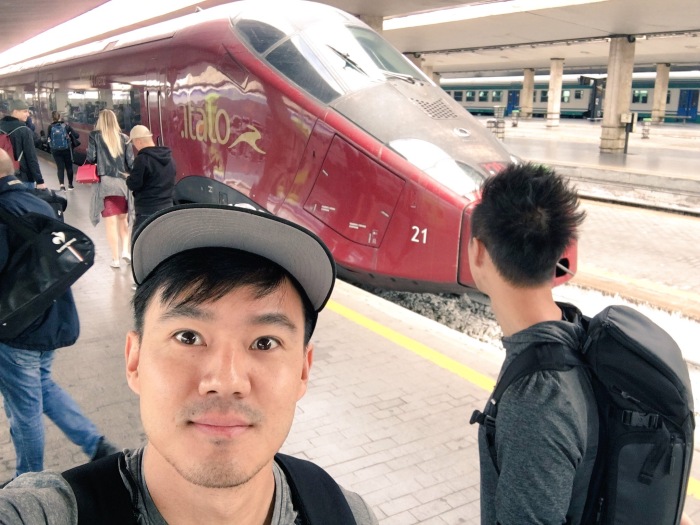 Taking the train from Florence to Rome. I literally bought the tickets 5 days prior. Had to google how to get from city to city. Thanks tripadvisor and google! 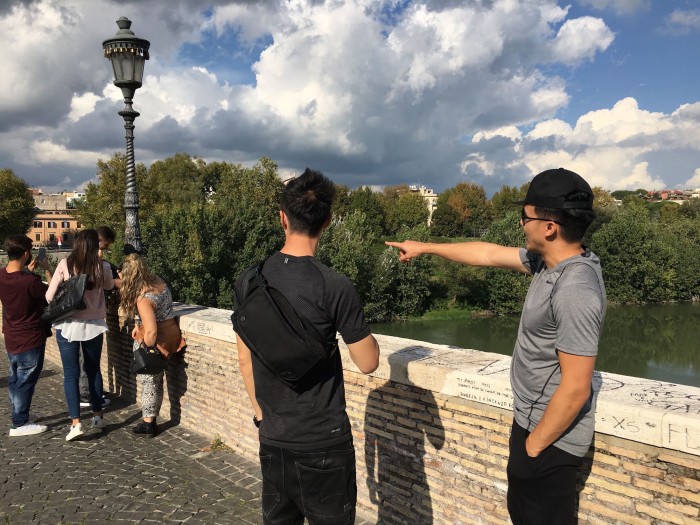 As soon as we arrived in Rome we went straight to the bridge to scout it out. A lot of serendipitous things about this location. First, the locks have been banned, so that meant there were far less tourists around, meaning it’d be easier for us to shoot. The bridge is also in an area of Rome that’s pretty far from the main tourist attractions so it was just a much more quiet and local feeling, giving us less stress. It was literally just Wes and myself shooting, so any external factors to make things easier was welcome.

We went straight from scouting to meet our actors for the first time. Portia helped us find Bea through friends of friends, and Bea found Lorenzo. They’re both students but also act for fun in a theater group. All this literally happened a week prior to shooting. I was so nervous I wouldn’t be able to find actors, but thankfully we were blessed to have met these two. They were SO enthusiastic and kind, and their English was really good so it made rehearsing and directing much easier. They even translated the script for me!

First time ever reading the script with the actors just a day before shooting. We met at a random park and practiced until the sun went down and the park closed. Nothing glamorous about it, whatever it took and Bea and Lorenzo were totally down!

But not everything went according to plan. Weather was supposed to be perfect, but one completely random day of rain messed up our schedule. Thankfully everyone moved their schedules around and on a bright sunny morning we started shooting on the bridge, Ponte Milvio!

Helping Wes tie his shoe ;P. jk, Early morning, very few people on the bridge. Bystanders must’ve been so confused (like this guy on the left). “What are these 2 Asian guys with a camera and 2 local Italians doing here?” (Notice our bags on the side. We literally went to the bridge, dropped our stuff, and started shooting!)

Nothing fancy about it. Just us, and a camera. That’s all you need. For real. Oh and mics, in this case hidden under their clothes, and me recording/monitoring with equipment around my neck… 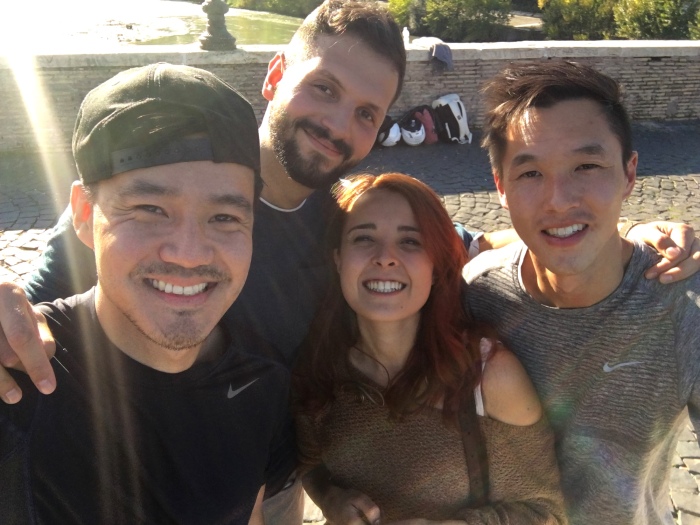 Our leads! That’s a wrap! With the sun setting behind us, a fun full day is also behind us. So relieved when we finished, I couldn’t believe we pulled this off. 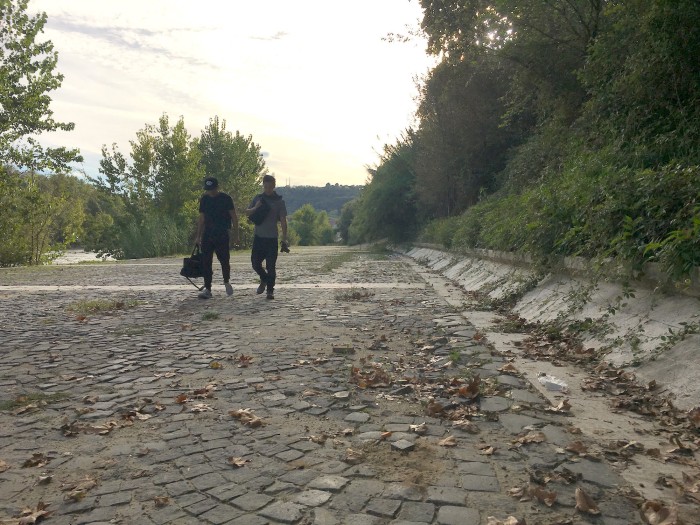 We packed our bags with equipment, arrived, unloaded, said a few words, pushed a few buttons, packed everything up, and left. Some people like buying souvenirs, but really, nothing beats the feeling of returning home from a foreign city with a short film, unique to that trip and that time. Proud to have shared that feeling with Wes around the world. 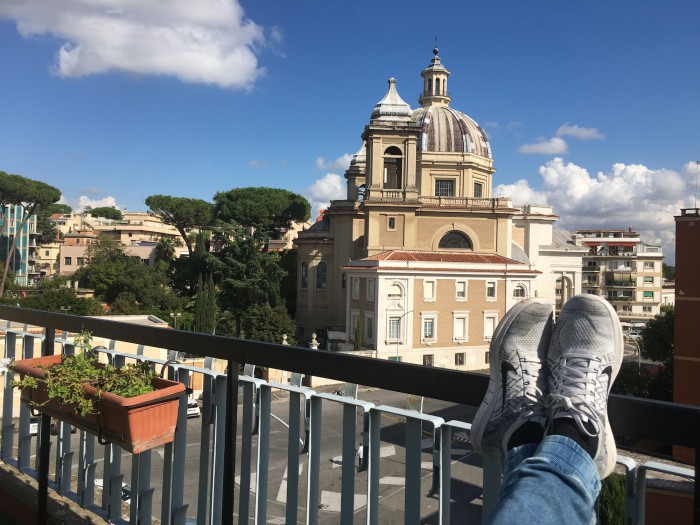 And gratitude doesn’t go to just him, but to the team back at home as well, which allowed me to be there in the first place. The day before we started shooting, I was sitting on the rooftop terrace of the little hotel we were staying at and I had a perplexing moment. How was I here, around the world, getting to make an idea in my head, for no real reason except, “just cause.” How does that happen?? I felt so lucky. The company being supported by Taylor, Ashley, Chris, Benson, & Jen.. allowing Wes and myself to create freely, while also knowing we have an audience ready and excited to watch what we produce. It truly is a blessing in so many ways and I never take it for granted. You guys allow us to have these experiences, and in return, I hope we can continue to make content that brings you joy.